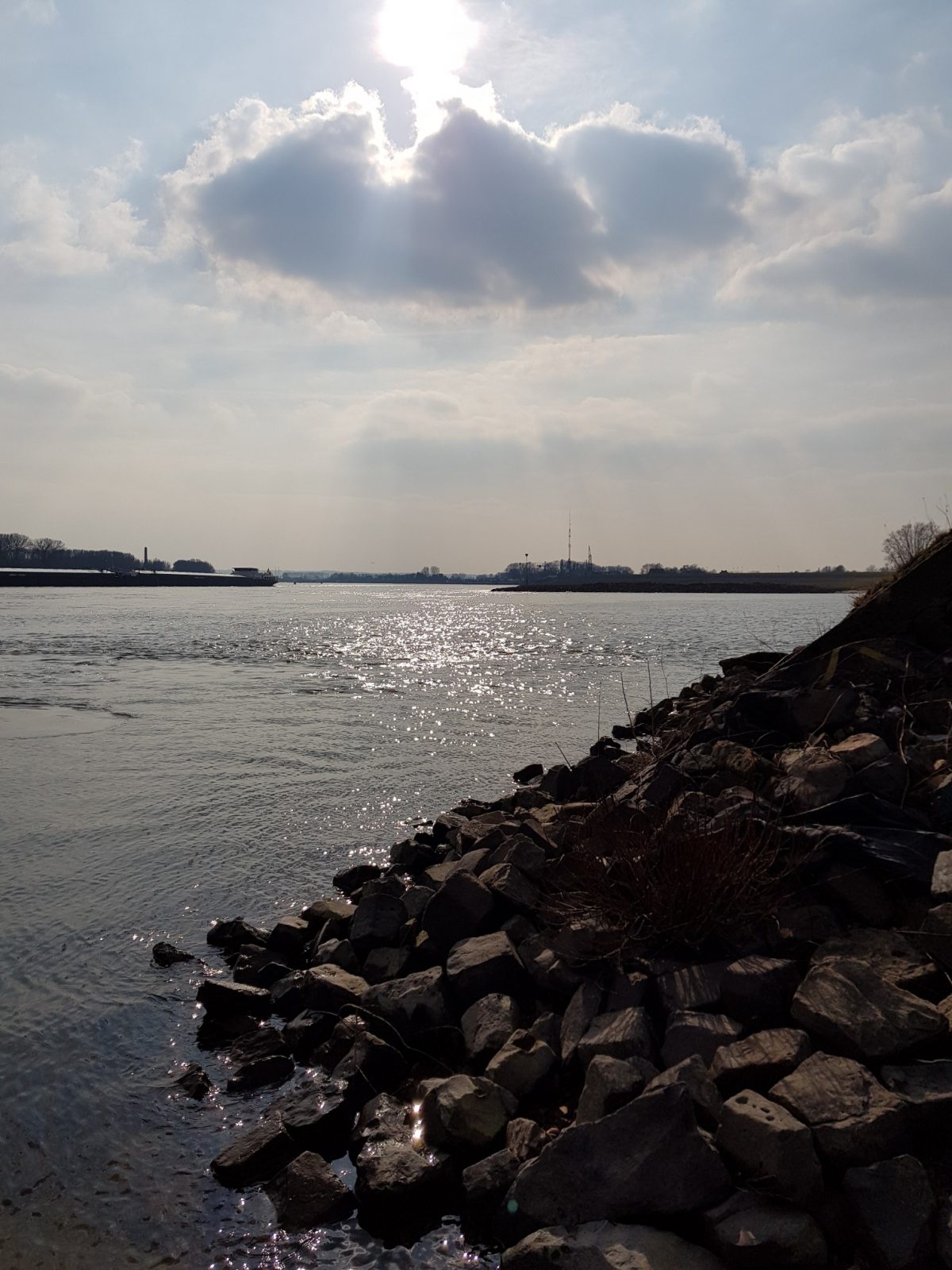 It’s likely that tomorrow we leave the Rhine cycle route, splitting off just before Lake Constance. Though we’re not done yet here’s some thoughts about it.

It’s been a beautiful ride all in all. The terrain, on the whole, very accommodating – though as anticipated never so good as we had it in the Netherlands. It’s been a great way to warm up our legs, find out where the aches and pains are and get used to hauling approx 40kg (surprisingly we haven’t weighed this) of bike and baggage.

The Rhine itself is beautiful of course. The path wending it’s way on banks running adjacent to the river itself, along the ridge of dykes, through forests, down magnificent tree lined avenues, following canals, through villages, towns and, sometimes alarmingly, cities suddenly buzzing with people and cars and lights, and then back through the industrial estates and back into the fresh open air. Some days we’d pick one of the huge haulage ships cruising upstream to race through the day. We’d travel a little faster, then we’d stop for lunch or a pastry or a cuppa and find that Elizabeth 1M or Privilege II had snuck past us, so we’d set off in (not so) hot pursuit.

The campsites have been varied. Sometimes they seem like a bargain, with beautiful Rhineside views and free hot showers, and sometimes a little run down and grotty. We’ve come at that point of the year where it’s almost in-season but there seems to be no rules.
Our favourite paid for spots were:
Camping Loreleyblick
Hochrhein kanu
Thanks to Liz at halfashoestring.com for the heads up on both of these.

The weather has been changeable from frozen mornings when we were pleased we brought the extra warm sleeping bag to balmy 20 degree afternoons where arms were out and suncream opened.

Other highlights include:
Pastries bought from bakeries. Our favourite so far was definitely the immense slice of poppy seed cake purchased on their outskirts of Cologne to give us the strength to tackle the third city of the day.

The sunsets, much admired while cooking and setting up camp.

The birds and animals we spot as we amble by. Hares racing across freshly plowed fields, storks nesting, ducks and geese, herons, sparrowhawks, buzzards…

Rhine cycle path day 6. Found a spot with a great view to pitch the tent.

And then last but not least those generous people who open their homes to passing tourists.

Femke and Douwe work most of the week in their day to day jobs. Femke advises on sustainability policy and Douwe is a tree surgeon and gardener. One day a week they work on their tree nursery, growing and selling fruit trees. They moved to the area quite recently and are looking forward to bringing their bees from Rotterdam.They now live below a working windmill and their tom cat has been known to scent orlieb panniers – a cat of discerning taste.

A few years ago this gang of economics students decided to buy and renovate – with a lot of help from a local housing association – a rundown house in Bornheim. They lived there during three renovations and carried them out while doing their bachelors. Now the beautiful house has 9 residents, and they keep a guest room for passing waifs and strays. They even built a sauna, which they generously fired up for two weary cyclists after a delicious dinner.

Family Soare are a family of cyclists and musicians. We arrived too late to eat together, but we were serenaded by accordion and clarinet practice over our wonderful home cooked veg lasagne. Later over tea and homemade cookies Andrei told us about their travels by bicycle as a family. One year they cycled all the way to Romania from Dordrecht with their four boys and stayed with warm showers hosts every night.